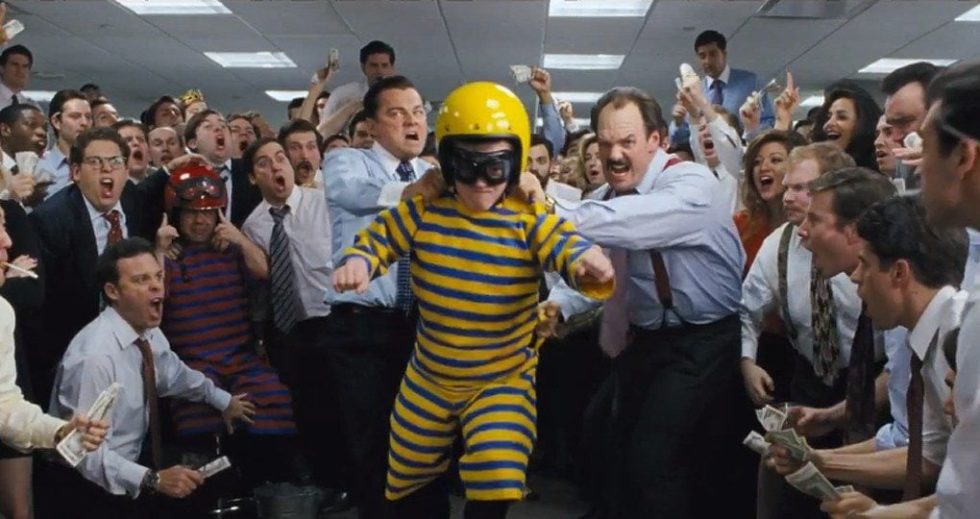 Leonardo DiCaprio defined a lot of my adolescence. I fell in love with Shakespeare after watching him in Romeo+Juliet. Titanic was my first PG-13 movie. Gangs of New York, Catch Me If You Can and The Aviator were all popular points of discussion in high school. One of my first dates with my now husband was to see The Departed. Suffice it to say – I’m a fan.

Then came Wolf of Wall Street. This led to all sorts of questions from family and friends about what I do for a living. Some were downright insulting (“do you lie to make a sale?”) while some were merely curious (“do your colleagues use drugs?”), but all removed any joy from the movie because of the conversations they forced. I watched other ‘sales’ movies – Boiler Room, Wall Street, and Glengarry, Glen Ross. Every single one – while I’d heard each quoted a million times – disturbed me. None painted even CLOSE to an accurate picture of my career and the peers I’m proud to work with.

When I moved into management and started sourcing talent, I hit these conversations again. These assumptions based on popular culture designed to tell great stories fail to represent reality and actively diminish the work of 21 million professionals at work every day. It has now been 5 years since Jordan Belfort inserted himself into my life – and I cannot go more than 48 hours without a reference or a gif from the movie reinforcing all the stereotypes I’m fighting daily.

Let’s examine these common misconceptions – and tell some #salestruths about what an incredible opportunity sales can be.

Everyone has been the victim of a slimy salesperson using salacious and disingenuous tactics to trick you into buying something. This is not sales – it’s manipulation. True salespeople don’t “sell ice to eskimos” – they believe in their solution and the problem they solve and are passionate about telling stories. A common bit of advice (first told to me by Adam Aarons) is  “There are two winners in every deal- the one who wins and the one who gets out first”. No one is paying you to manipulate your clients into buying something they don’t want or need. In fact, it’ll get you fired.

Reputable companies pay sales people salary and commission. That means your salary is guaranteed (ie you get it twice a month) and commission is paid (typically) monthly based on attainment of quota. CEB released a study which found that average quota attainment was 67% for men and 70% for women. Anecdotally my experience has been close to 80-90% of entry-level positions earn between 95% and 105% of quota consistently. So will your monthly payout vary? Possibly. Will you have plenty of notice to plan accordingly? Yes. Quota is simply a tool used to directly tie performance to pay. You perform – you get paid, oftentimes very well.

This is perhaps the most untrue. Top sales teams are set up so, while competitive, they are separated into patches, resulting in zero opportunity to sabotage a coworker. (E.g. If I own all business in North Dakota and you own all business in South Dakota you can’t “steal” any of my business.) In fact, the best teams have strict rules of engagement or “stay in your lane” policies which lay out clear consequences for engaging in counterproductive behavior. You coworkers will absolutely compete with you to be at the top of the leaderboard – but whoever ends up at the top is expected to share their strategy and help their teammates stay competitive.

I’ve directly hired over 50 people and indirectly influenced the hiring of another 50-60 people in my career. Of all of those hires, 3 decided sales wasn’t for them within the first month or two and didn’t get a sales job somewhere else. The myth of “washing out” is typically as simple as a poor culture fit or a personal issue (ie they moved cross country and hate their new city). In the rare case of a performance issue, the person involved was given additional training and opportunity to improve but left. I know of only one case where an individual who left due to performance issues did NOT accept another sales position and thrived. This myth is a relic from the days of hyper-competitive sales programs where dozens were hired and only 4-5 survived at the end of the year – no one does this today and if you smell something like this happening RUN.

Alright – this one is half true. You will spend most of your day on the phone talking to strangers; however, it isn’t as bad as you think! You’re offering a solution that will help make their lives easier and in most cases people are actually nice! They may be abrupt but as long as you’re polite and honest it’s fine. Your biggest enemy is people not answering in the first place! As for the script – most programs will give you “talking points” and ask you to build out your own script so you sound natural and human. Yes you’ll have your routines – but on the whole I promise this isn’t as bad as it sounds and you won’t feel too much like a robot!

Oh and one last Bonus Myth…

Tech sales is a “boys club” filled with “bros” which requires partying to get ahead.

This. Is. Not. True. It never really was.

Will you meet some “bros”? Absolutely. Will there be parties? You bet. Do you have to drink? No. Do you ever need to do something uncomfortable to get ahead? Never.

One of my favorite things about sales is you dictate your own success. The days of “wine and dine” went out with the Great Recession. Some of the best leaders in our profession are sober, single parents or deal with medical issues that require strict schedules. I’ve witnessed multi-million dollar deals that were “closed” over delivery pizza at 11pm at night. What you do matters above all else.

Many offices have kegs and wine or food for employees – you do not have to hang out or partake. There will be those that do, and every office has that one person who reliably makes a fool out of themselves at the company party, but it’s rarely, if ever, the top performer. In fact, after a number of high-profile horror stories out of some outliers in Silicon Valley, many companies are swapping the beer kegs for cold-brew coffee or kombucha on tap!

The face of today’s sales team is changing. Companies are updating the wording in their job postingsto attract more women and minorities. Study after study highlights the importance of diversity in the workplace. CEB has found that companies with strong gender diversity have larger customer bases and higher revenue numbers than companies without diversity. Harvard Business Review has found that companies that are ethnically diverse are 35% more likely to outperform companies who aren’t. Credit Suisse found that more women in management led to 27% higher return on equity and 42% higher dividend payments.

This change in the workforce is also leading to a change in workplace cultures. More companies are competing to have the best maternity (and paternity) leave policies. Top-flight healthcare is becoming table-stakes and mental health is included in most plans. Work-from-home is available for certain roles. At a recent sales development conference the biggest laugh was from a reference to a drag queen – not an outdated sales movie. The wolf is irrelevant.

The era of boozing, partying and schmoozing to get ahead died years ago. The effects are still being felt and addressed, and sadly some aren’t ready to let the old ways die. However today’s sales professionals are positive, curious, driven and respect ethical results above everything else. If you encounter a company which makes it clear they do things “old school” you do not have to work there.

There are hundreds of companies looking to hire the next generation to continue these trends and fight these myths. Not sure how to find them? Want to make sure you ace the interview? Interested in going above and beyond to become a top performer? Come talk to us – or our current fellowship participants, graduates or partner companies. Check out our Fellow of the Week posts for real tales from the trenches.