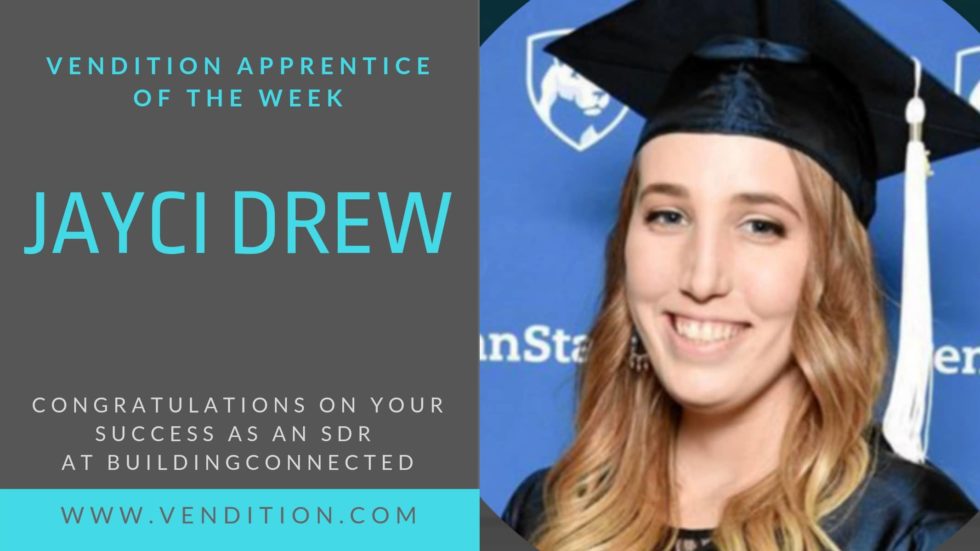 This week, we recognize Jayci Drew at BuildingConnected as Vendition’s Apprentice of the Week. Jayci was very interested in moving into tech sales, but she was having a hard time getting her foot in the door at the tech companies she was pursuing. After stumbling upon the apprenticeship program with Vendition, she found exactly what she was looking for. Since February, she’s been hitting the quotas set for her at BuildingConnected and continues to bring her can-do attitude to each task set before her.

Jayci shares that sales wasn’t new to her, but the industry and the environment were entirely new. “I wasn’t originally coming from tech sales.  I recently moved from Pennsylvania to New York City and was looking for something that would peak my interest. I was in sales before, but not in the tech industry — which I learned is something that offers great career potential and career growth.”

When asked about how her experience has been starting out, Jayci credits learning by doing in helping her to be comfortable right away. “Breaking into a new field was daunting, but I’ve become a lot more confident in my abilities and I can pick up [concepts and strategies more quickly].” Jayci adds that picking up the phone and knowing that she could help someone on the other line was also a huge motivation for her.

In regards to her coaching sessions with Ashleigh, Jayci shares that Ashleigh’s guidance helped her transition into a new industry. “I had previous experience in cold-calling and sales when I used to sell jewelry, but not both at the same time. The ability to have someone outside of the situation giving advice on something that was happening in real time was something I really appreciated. I’m very thankful that I was able to get a connection to BuildingConnected and feel like the support from both Vendition and BuildingConnected has set me up for success.”

Jayci’s biggest piece of advice to those starting out: “The most important thing is to have your confidence. You’re still making a connection.”

Keep up the great work, Jayci! The Vendition team is proud to have been a part of your story, and we look forward to seeing what more will come your way at BuildingConnected!