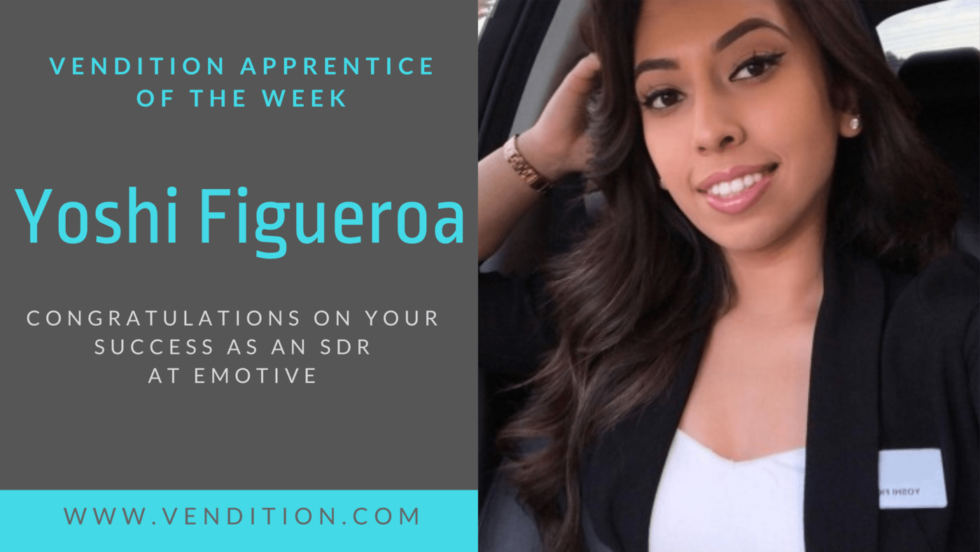 Congratulations to this week’s Apprentice of the Week, Yoshi Figueroa at Emotive!

Yoshi has always given 100% effort to anything she attaches her name to, which is why she chose to start her career in sales. Motivated by the potential to have her efforts match her earnings, she started searching for an SDR role and landed one through Vendition at Emotive! While she had prior retail experience, it was nothing similar to her current role in SaaS sales. She was aware of the challenges she was going to face and was ready to tackle them head-on.

Knowing culture was of utmost importance to her, Yoshi worked with Vendition’s recruitment team to find the right fit. Emotive stood out during the interview process. “Interviewing with the managers at Emotive was different than any other interview I’ve been in. The questions were more personal and I felt like they cared about me as a person. What has kept me here is the culture they have developed. It’s just an amazing company and I’m super happy to be here. I feel like I was destined to be here.”

Working at a start-up has been rewarding for Yoshi and has tested her adaptability. “One thing you have to know heading into a start-up is that it’s like building a plane while you’re already flying it.” She came in open and receptive to change, which has helped her grow in her role. “I know that every change has been for a good reason and is going to have a better outcome than what we are currently performing at, I just roll with it.”

The level of support that Yoshi received during the Vendition Apprenticeship exceeded her expectations. Her main resource was her Vendition Coach, Tyler Lindley. “Tyler was always available to me and posting resources nonstop to Slack. Sometimes I would be too embarrassed to ask questions in a company setting and it was always so comforting knowing I could ask Tyler anything and have somebody else in my corner. He gave me a safe space while I was learning.”

Yoshi also attributes much of her success to her amazing managers at Emotive, Victoria Simbol and Benjamin Kuehnle, who have been incredibly supportive in her journey.

Here are some of Yoshi’s Top Tips for aspiring SDRs:

We look forward to following your future successes, Yoshi!