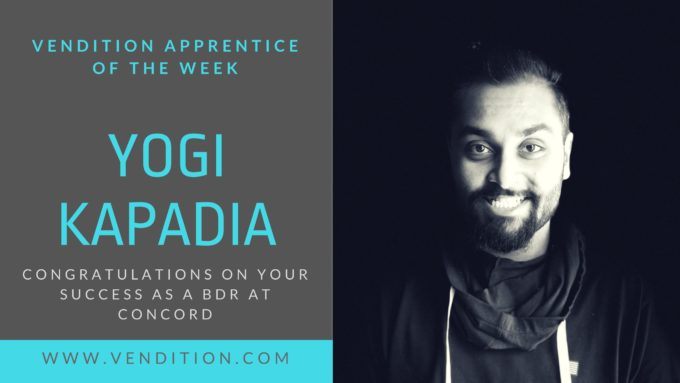 This week, we’re highlighting Yogi at Concord as Vendition’s Apprentice of the Week!  Since January, Yogi has been helping build out Concord’s BDR team and crushing it at the same time.

“Basically I came in here at Concord earlier this year, and I was the second BDR to come onto the team.  We had no formal training set up in house, and Travis, the VP of Marketing was familiar with Vendition’s apprenticeship program so he got me and Brad, the other BDR, enrolled.  Funny enough I was actually already familiar with Vendition before I started up my coaching.

“I connected with Concord because I saw a lot of growth opportunity, and the product itself is just amazing to me–it’s simple and a product that a lot of companies can use.  I was looking for a small organization where I would have a lot of impact, too.

“Working with Vendition really helped me out–training helped me with setting up priorities for the day like what sort of tasks I should prioritize to achieve that daily goal.  I set schedules and time blocks on my calendar. Prior to coming in, I was going ad hoc on the leads in his company. Vendition helped me to understand the way to prospect and really helped me move forward.  I continued doing things the coaching team taught me even after completing my training. ”

“With objection handling, I’ve been able to crush quota in the time I’ve been here.  And as one of the most senior BDRs on the team, I’m able to help the new BDRs we’re hiring.  I’ve been using strategies I learned from Vendition when I offer a lending hand.”

Some top tips from Yogi:

“You have to be resilient and maintain confidence. Never get beat down–you’ll go through hills and valleys so don’t be scared to try new things.”

“Work hard, don’t just give up when someone says no.  Reach out to someone else in the organization, there have been so many times it’s worked out for me because I switched that up. Find someone who may be more hands on with the process.”

“Just because someone’s told you no over the phone, it’s still worth the shot to send over a little more information.”

Keep up the great work and persistence, Yogi!  We know you’ll continue to crush quota and help Concord grow.