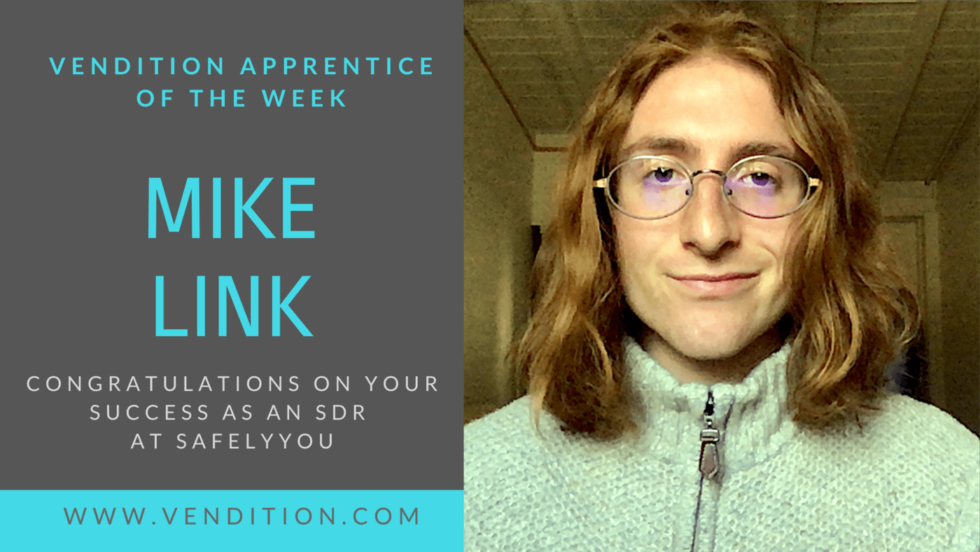 This week, we nominate Mike Link at SafelyYou as Vendition’s Apprentice of the Week.   He truly found the perfect fit with his interests by joining SafelyYou. Mike had always been selling, selling candy to friends back in grade school for a profit. With studies and other work experience, he was dedicated to breaking into more medical related technology. Now he carries the title of highest demo ratio on the team only months after starting.

Mike notes that his childhood entrepreneurial pursuits gave him an interest in sales. “When I was younger, I realized that I could use my relationships and my business knowledge to make money…so I didn’t have to wait for my parents to give me an allowance. I studied neuroscience in college, and I was like my gosh, like understanding psychology and how people work, and with my experience with people, I felt like sales would be so cool.”

Given his interests and research experience in dementia and Alzheimers, Mike says that in school he started adding business classes to his course load in tandem with neuroscience when he figured out that going to med school wasn’t the right path for him.  “I was interested in why the brain starts to not work, and I looked into companies that are trying to make drugs for Alzheimers and realized that wasn’t the path for me.  I thought to myself, I have to  do something different.  The reason I ended up connecting with SafelyYou was the mission: better care for those in the community.”

He also felt a connection after speaking with Tom in the first conversation. “The way Tom interacted with me, I knew he was actually listening to me and curious about what I had to say. I remember thinking to myself:  ‘Well, I would love to work with this guy regardless of what SafelyYou does.’”

His feelings were mutual!  Tom at SafelyYou says of Mike, “As SafelyYou began building out our SDR team, we were attracted to Mike’s unique interest in our space. His tenacious practice enlisting those he outbound calls, to help him learn even more, yields him our highest demo ratio, which is seldom seen as selling. He’s the first to volunteer his recorded calls for brutal team critique, for which he has earned our badge of courage!”

Mike notes that in his coaching sessions with Sam, reviewing cold calls and where he could improve has been most helpful to his success. “Reviewing recorded phone calls and saying, ‘you could have said this… or this…’ That was extremely valuable because you’re put on the spot listening to yourself on the phone.   When you hear yourself screw up, you won’t do it again.  Hands down, reviewing calls is the most helpful thing.”

Mike says that since starting, he feels he’s seen the most improvement with how quickly he can think on his feet.  Most recently, he objection handled a prospect in Spanish despite starting the conversation off in English!

Mike advises SDRs starting out to…