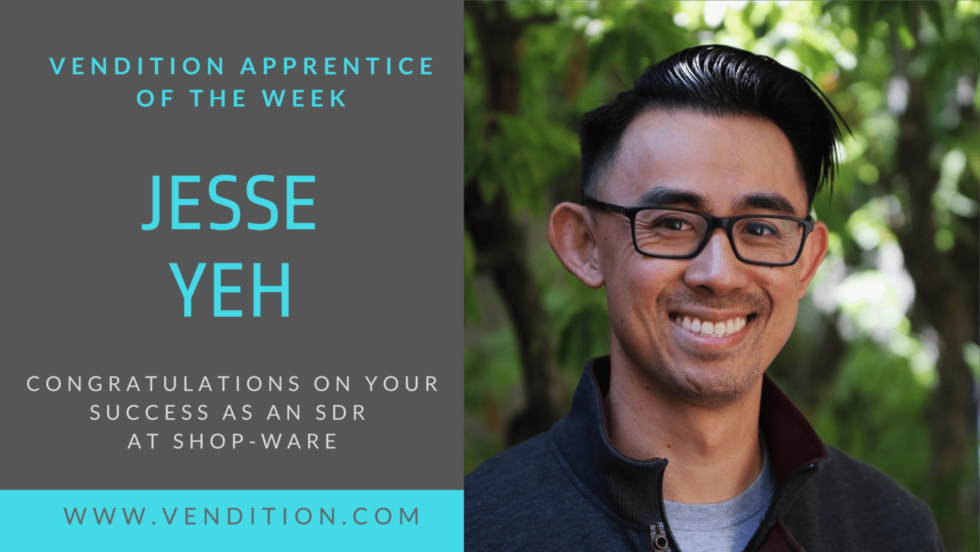 Congratulations to this week’s Vendition Apprentice of the Week, Jesse Yeh at Shop-Ware! Jesse had been in retail sales and then operations management in retail since graduating college, when he started to consider his next steps from management.  He took a year to think through his options, and by the end, he knew he wanted to transition to tech.  He got in contact with Vendition shortly thereafter!  Since starting on at Shop-Ware, he’s been integral to testing out and developing sales processes with his manager.

Read on to learn his Vendition story:

What appealed to Jesse in startup culture was adaptability, the dynamic, ever-changing state of the business, especially in light of Covid.  “Coming from a larger corporate setting, the ability to change gears immediately was a very nice change of pace for me. At large corporations, it’s not easy changing directions quickly. It has to go up several levels to a higher director to another director before that decision gets made. So it was nice that we were able to just pivot immediately. If we said, ‘this tactic isn’t working, let’s shift gears and try something else that will work,’ we could actually do that.  I loved it.”

Shop-Ware also gave Jesse the opportunity to leverage his past experiences to apply it somewhere new. Jesse had been in operations and sales back in his retail days. “After being an operations manager at a large retail corporation, I was interested in an opportunity to build sales and operations processes at a startup.”

Overall, the onboarding experience has given him new confidence with various tools, like Salesforce, and he feels completely caught up to speed. He felt that coming in with a foundation in retail sales was helpful, and the coaching provided through his Apprenticeship enhanced his sales skills in a more nuanced way. “The coaching sessions served as the right tools to help me course correct.  I had a general idea of what to do coming in, so it was more tactical on how to take what I knew how to do and to apply it better.”

For example, several coaching sessions were focused on cold calling.  Jesse had familiarity with “warm sales” in his retail days but cold calling is a whole other beast. “With retail, people go to the retailer because they need something.  Being on the other side of having to go out and cold call is completely different. How do you approach somebody who hasn’t raised their hand? We covered different methods for structuring the conversation for quality engagement as well as practiced these calls before making them, which was super valuable.”

Jesse’s manager Margot appreciates Jesse’s contributions to the team. “Jesse has been a great addition to our team. He is a strong strategic thinker and is methodical in his follow up. Thanks Vendition for helping us find such a strong team member!”

Some top tips and reflections from Jesse include the following: