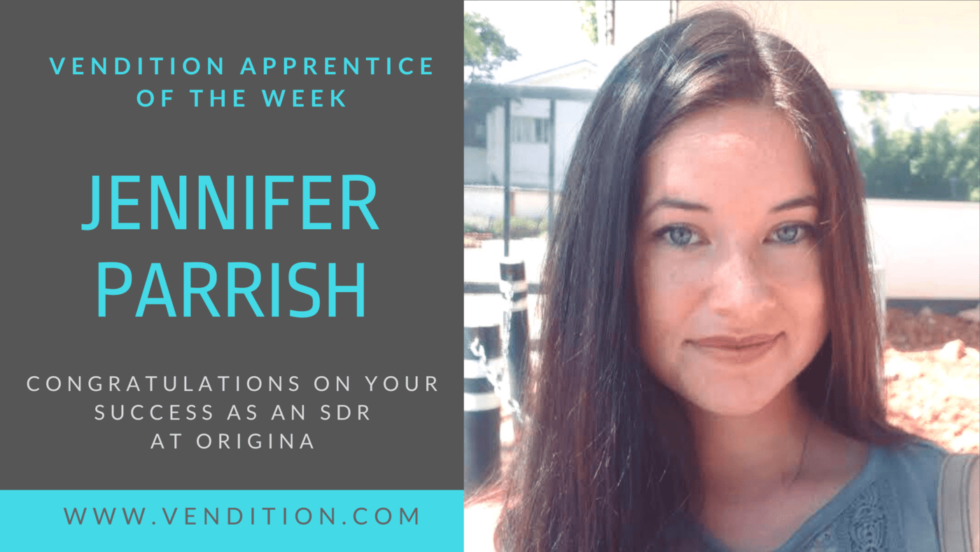 There are many paths you can take to have a successful sales career as long as you leverage the right skills and experiences and that’s exactly what Jennifer did. In her short time thus far as a sales rep, she’s already seen an opportunity she opened turn into a closed won deal, which is a huge win given Origina’s longer sales cycle.  What experience did she bring to the role before starting? Shortly after graduating with a Health Promotion and Behavior degree from the University of Georgia, Jennifer spent just shy of three years working in public health with the Peace Corps.

As she was figuring out her next steps from the Peace Corps, Jennifer learned through research and networking that her background would provide a great foundation for pursuing a career in sales. “Before the Peace Corps, I had a lot of experience in college recruiting, where I was selling the school and its benefits to prospective students. In the Peace Corps, I was also selling by getting people on board with projects to improve their health and looking into all the reasons why that would be beneficial for them. I found myself trying to come up with unique ways to get people interested in what we were doing versus everything else that was also available to them. So it seems like I was already applying sales skills in my previous experiences”

Origina was the perfect fit for Jennifer: she was looking for a small working environment with security behind it. She liked the idea of being one of the first reps opening up a new office in Dallas. Being able to have both the startup environment as well as an established foundation in Ireland seemed like a great balance.

In addition to the environment, Jennifer found the training and development she was looking for. “Both my boss Sharon and my Vendition Coach were really involved in getting us trained starting out.”  Towards the end of her Apprenticeship, her manager Kevin came on. “With that change, we’ve grown from focusing on our individual development to working more together as a team and it’s been really great. We get along really well together , and we can have fun and get the job done at the same time.”

As she’s grown in the role, Jennifer says confidence has grown most in her ability to cold call and connect with people.  “It was really nerve wracking in the beginning but I’ve developed more of a schedule and routine. I remember being so scared to make those calls because I wasn’t sure how the conversations would go.  But now, I am not afraid to make those calls whether or not the person’s nice on the other end of the phone, because I know what I’m supposed to do and I know how to navigate it.”

The most beneficial, and fun, part of her coaching sessions with her Vendition coach was role playing.  “Not just with my own attempts with role plays, but also listening to others as well, it was so helpful just getting practice.  The feedback was really good, and in getting to work on specific situations, I felt like I was constantly improving.”

Jennifer’s advice to SDRs starting out: