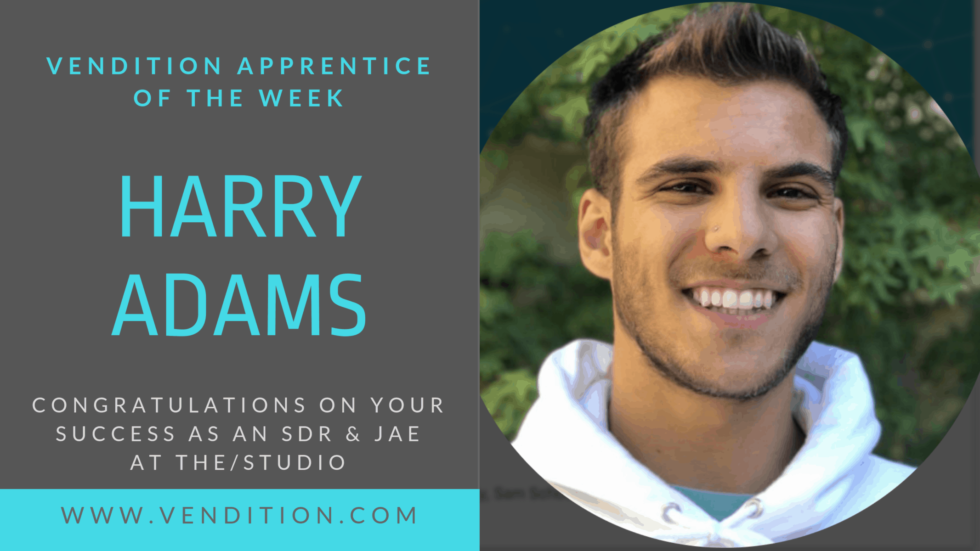 This week we recognize Harry Adams at The/Studio as Vendition’s Apprentice of the Week.

Harry graduated from Dickinson College in the spring of 2018 and moved to the Bay shortly after.  For the years after graduation, he worked in a marketing and communications capacity and wanted to transfer his problem-solving skills to a tech sales role when he was starting to look for a change.  Since March, Harry’s been bringing his creative nature to the SDR role and now Junior Account Executive role.

“Sales for me was just an extension of what I had already been doing.  My last role was in marketing and communications. So when I was thinking of exploring other options, I started with industries that I was interested in.  I graduated in May and moved to the Bay in June. The tech scene is hard to ignore here and it’s exciting, and I knew I was super attracted to that. I also knew within tech that there are so many ways to get involved.”

Harry shares that he wanted to focus on his strengths, so he narrowed in on the SDR/BDR role, “I felt [this path] was just an extension of what I had been doing well in my last job: communicating and problem solving.  When I started applying for jobs on LinkedIn, it was super overwhelming. You would search the SDR or BDR title, and you’d see pages and pages and have no clue where to start. So I just did it, and I think I sent over a hundred applications. That said, the ones that seemed most exciting always revolved around working with recruiters.”

Harry says that he’s always been into art and design.  “I’m a musician and an artist, I’ve always been attracted to industries that are more creative.”

In regards to why he connected with The/Studio, he found the company to be creative in fashion and design.  “I felt like sales was a great way in. The/Studio had a combination of different interests that I was exploring. I remember my initial conversation with the Vendition team, and as soon as I gave a little background on who I was and what my interests were, and my Relationship Manager said, ‘there’s one I have in mind.’”

“I’ve found a great cultural fit as well, the people here are brilliant. From the time I came onboard to now, the mission of The/Studio has changed a bit.  Initially it was matching brands with small batch, quick turn production runs. Since being here, we’ve pushed it to an extreme–we’ve pushed it to no production, only demand. That constant drive to be new, relevant, and extreme is a great cultural fit for me. I didn’t have a background in the industry, but just learning the language and what’s important to these individuals and businesses really helps me feel like I’m dealing with the solution.  By adapting the mission, the goal is here to fix a problem that hasn’t been addressed previously. People aren’t thinking digital first, and this is more geared towards the industrial revolution.”

From day one to now, Harry shares that he feels he’s grown the most with industry knowledge. “Before my interests were just in production and design, with new and exciting trends. Now it’s all about ‘how do you actually make that happen,’ and understanding what problems people are facing. When I speak to brands, I ask them, ‘what did I say that made you want to talk to me?’ and they’ll tell me something along the lines of ‘you mentioned something about the supply chain of the future.’ I think people are always looking forward and looking ahead, and I’ve changed from strictly what’s happening now to being able to forecast trends and what’s going to be big next.”

Harry’s tipping point for his process: figuring out who to reach out to and what they wanted to hear.  He says this was pivotal in his work with Sam. “The biggest breakthrough was prospecting and narrowing in on who I was trying to talk to. Sometimes it’s really easy to start with a message and find people you can target with that message. The thing is with fashion brands, there are so many ways in. I think that understanding that the solution can be implemented through so many different doors  and being able to understand the different personas has been super essential to my success.”

Harry advises SDRs just starting out to stay level-headed. “It’s hard, some days can be really frustrating, and some days it’s hard to not take rejection personally.  My best advice is to not take everything too seriously. Never take something personally because odds are they just don’t get it. Don’t ride the highs too high and don’t get low when someone tells you to get lost. They may leave a meeting next week and think, ‘Wow, I wish that guy would give me a call again.’”

Harry’s advice with worth taking to heart.  Since starting, he’s moved up to Junior Account Executive and seen some other small wins, as well. “My first month I was only booking meetings with underwear brands.  For context, we’re targeting all apparel brands and for some reason all I could do was underwear brands. They were big companies: Hanes, Fruit of the Loom, Jockey, etc.  So everyone started calling me Captain Underpants. Still a win! It was great booking meetings with these huge global brands, even though I started questioning my messaging.”

Keep up the great work, Harry!  The Vendition team is proud of you to have helped you find the right fit.  Continue to bring your creativity and your dedication to your work, and we know you’ll continue to see success at The/Studio!