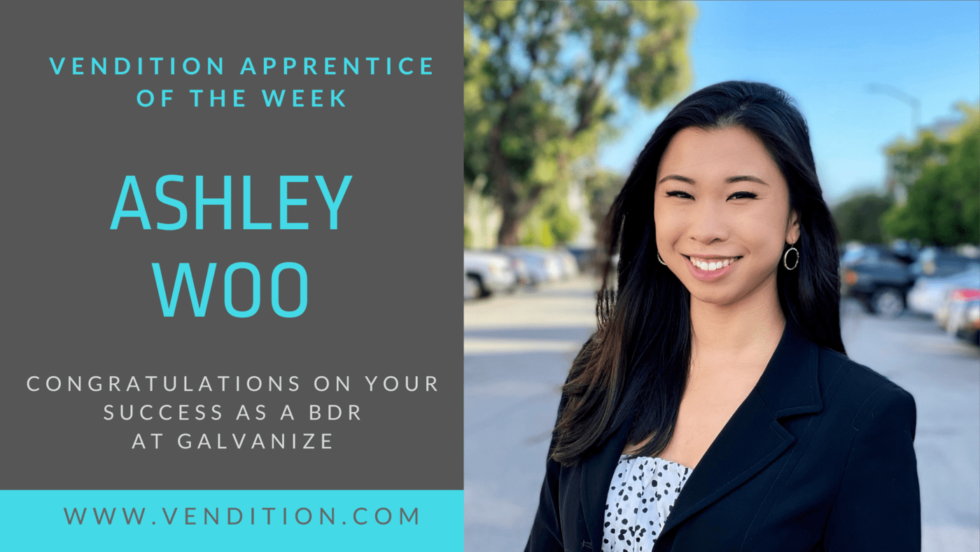 After spending several years studying and working in Veterinary Sciences, Ashley Woo found herself at a crossroads. She gained valuable experience; however what she enjoyed the most were the human interactions and relationship aspects of her professional work.  So she intuitively did what any natural salesperson would do: she prospected, did discovery, and decided on an adjusted solution to her career!

“I was originally in the veterinary field and I thought it would be completely the opposite of sales.  I was really surprised by the conversations within my network to find that, ‘Hey, I don’t really have to have a degree in business to get started in sales.’” Ashley went to a networking event at a sales-related software company and found that she loved being immersed in the space. “I really liked the energy I felt there, and that was the first time I remember thinking to myself that I wanted to try out sales.”

Ashley had considered and gone through other sales programs, but through her partnership with Vendition, she was able to find the support and mentorship needed to evaluate her own skills and how that aligned with a career in sales. Once she had the support and confidence, it was off to the interview process and finding the right culture fit. Part of that was finding a company that valued her nontraditional background and truly wanted a team member who brought a strong learning mentality to the role.

The pace and dynamism of the role sounded great, but what really convinced her to move forward with the Galvanize team was the sense of investment she felt in their hiring and values. “Galvanize gave me some of those same signals that they’ll invest in people, and they’re all about bringing people up. One example is focusing on former military hires. As I grew into the role, I realized more and more my initial gut instinct was right. They invested in me and they want to help me learn. And I think that’s awesome.” Focusing on military hires was also a signal of the company’s commitment to people who have the right DNA to succeed.

Her experience as an Apprentice went well from the get go, which Ashley credits to supportive leadership and an opportunity to figure out her own process. “I was one of the two starting BDRS and I really liked the ambiguity of it! I was helping build out a process that wasn’t fully in place yet and that really allowed me to be creative in terms of how I make email templates or workflows for my day. Bill, my VP, encouraged me, ‘Just go for it!’ I really appreciated the element of trust.”

One of the most valuable takeaways working with Vendition’s coaching was the cold-call approach. “Cold calling was one of the areas where I really felt incompetent at the start. My coach’s confidence in handling the objections definitely rubbed off on me and it helped me rephrase how I handled the objection. I stopped feeling pushy and started thinking, ‘This is how you respond,’ and asking myself with each call, ‘What are your actual goals behind this cold call?”

Of all her wins thus far at Galvanize, Ashley credits a small win having a big impact: her first positive cold call. “The first one that went positively is something that to this day I am very proud about. It was the fruits of my labor: saying it out loud to myself, practicing with my coach, and practicing with my boyfriend, over and over.  All of these things came together in that moment. It wasn’t like I was a smooth talker right off the bat, but the person on the other end was still interested in having another conversation with me and that alone was powerful and validating.”